Another two weeks have passed and we are here with a new release, full of new features, improvements and bugfixes.

Like an operating system, a bottle has its own instance of WINE with more or less processes. These in several cases it is useful to have them under control, also to understand if a program is still running or if it has crashed.

In previous releases Bottles offered a global task manager, not very intuitive and it was impossible to tell if a process was running on one bottle rather than another. In this release we have revised it and it is now offered per bottle. 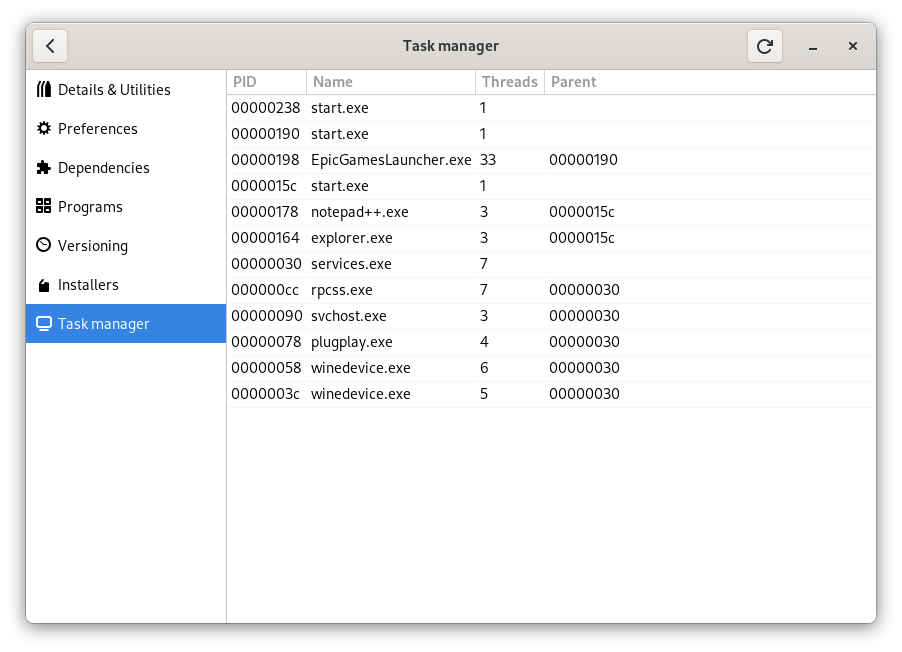 In fact it will only show the processes of the bottle we are viewing, making it easy for the user to browse the processes. At any time it is possible to restart the process scan by clicking on the circular arrow in the headerbar.

Bottles is heavily dependent on downloads, from the very first start where it downloads its essential components to start working.

To install new Runners, DXVK, VKD3D, dependencies, installers it is necessary to go through the Download manager. Before this release we didn’t have a real manager for these downloads and everything was managed by the Components manager. In this release the Download Manager makes its entry promising more performant downloads.

Performance aside, there are also news on the CLI side, because in addition to better managing the update of the download progress in the GUI, we have also integrated a progress bar via CLI.

In this release we worked to make the UI a bit more polished and consistent. In some cases, visual feedback of the operations in progress was not provided, leading the user to click multiple times or restart the application.

The most notable changes are in the removal and repair of a bottle, in fact before it seemed that Bottles was not carrying out any operation, now instead the entry in the list is blocked and a spinner is displayed indicating that something is happening.

Many behaviors have also been reworked, for example when you press a button that performs operations that take a few seconds, this is momentarily disabled, preventing the user from requesting the same operation.

When the task is completed it is reactivated, allowing a new request.

Although still an experimental feature, the Installers are actively developed and also in this release they have received important updates to improve the user experience.

These are manifests that contain instructions that Bottles executes to replicate an environment and install a program. Before this release, the steps were performed in order and when a dependency was requested or an executable started, it was not expected to finish installing or running. This in many cases resulted in the installer appearing as running, when in fact some operations were still running in the background.

In this release every dependency and executable (both automatic and waiting for user input) is expected, so the installer is marked installed only when the whole process is actually finished.

Among the new features we also find support for the experimental installer for Battle.net.

You can try it by enabling the experiment from the Bottles preferences, then creating a new bottle and selecting the installer from the Installers section.

The wineconsole (the terminal integrated in WINE), is used in the Bottles Flatpak to give the user access to the CMD and the Debug console.

We found this tool very useful but also very difficult to read, for this reason in this release we have decided to apply a “corrective” patch to the creation of each new bottle, to improve its reading (and look).

In first place we updated the color scheme with more brilliant colors, then increased the font size and the family to make it easier to read. This is a small fix that we hope will be appreciated, let us have some feedback.