Environment variables are important when working with Bottles, there are many cases in which we can use them, for example to pass instructions to the DXVK HUD.

So it is essential that these are easily manageable, which was not before this update. In fact, before you had to put them all on a single text field, boring and difficult when you have a lot of them.

Take a look at how we redesigned it below. 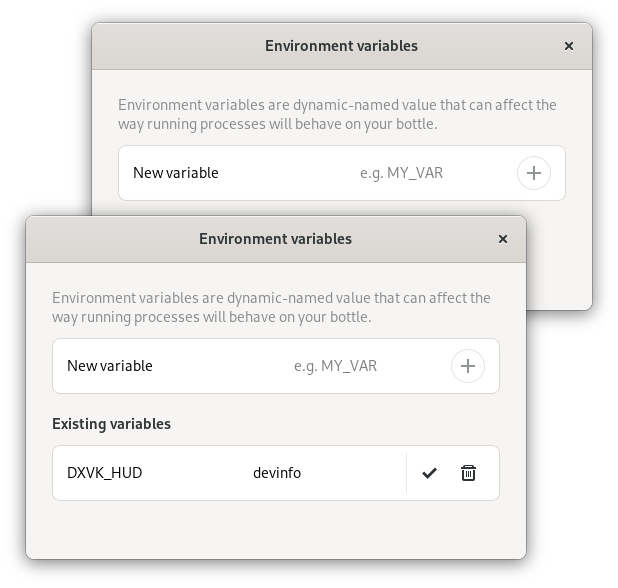 Now just add the variable name (e.g. DXVK_HUD) and then set its value (e.g. devinfo) and that’s it. To delete it instead .. guess it.

This means two steps are now required and it may seem more inconvenient, but try to imagine it in cases where 3 or more variables are used. Convenient isn’t it?

Well we drank a lot of coffee in this release, but this section is not dedicated to that.

Vaniglia has long been Bottles’ default runner. This offers the purest and cleanest experience of WINE possible on Bottles. Happy purists aside, many of us want maximum compatibility and often download third-party runners to achieve this. Well, that’s where Caffe comes in.

Caffe is the second official Bottles runner, built on top of wine-tkg-git (a huge thank you for their immense work, a really great project), it comes with a set of patches that guarantees a high level of compatibility. This runner is built on Arch Linux with a very up-to-date set of libraries and has been tested on the latest versions of Ubuntu, Fedora and of course Arch Linux. In some older distributions it could cause problems and this is where we recommend (again) to use Flatpak, where the runtime is up to date and offers the necessary libraries and tools to run it at its best.

Well mostly it is well built. Vaniglia was compiled on Ubuntu 20.04 using a set of scripts (build tools) written by us who downloaded the source, applied two essential patches. This however lacked gstreamer and other support essential to having a complete experience with WINE.

Caffe has been tested and found to go where Vaniglia could not, we are sure you will be happy with it.

PS. Vaniglia will not be deprecated for now.

With the previous release we introduced the Bottles Runtime, a set of libraries that Bottles injects into the environment to improve runner compatibility.

This feature has been made available to all Flatpak users and will soon be available to everyone (unfortunately we didn’t make it in time, we plan to do it for the next release). The big news here is how this runner was created, that is through runtimezilla, a project that allows you to assemble runtime from a given recipe. This tool allows you to ensure a correct copy of the libraries, avoiding arranged and inconvenient scripts.

In the old runtime some libraries were not loaded correctly and others were missing, with this update the problems have been solved and can now be defined stable.

This is a stability focused update, we have fixed many bugs and crashes but also improved several areas of the code for better stability.

It may be that you have noticed some random crashes, sometimes without a log. This was caused by an error in the management of tasks, that is, the operations that are performed in async in Bottles. For example, when you install a component, this happens in async to avoid freezing the interface. The error was in the management of the notifications of operations (the menu you see in the headerbar when there are operations in progress), this was updated by a second thread but being the widget spawned on the main thread, in the update phase they could collide causing precisely a crash.

The new management of the tasks takes place through a queue, all the async processes send a request to the manager who creates the task and keeps it updated, so when it is necessary to update it, a direct request will not be made but will act through the manager who in turn will handle the change correctly.

Yes well all technical things that we also struggle to understand :D, let us know if it works.

A few days ago we tweeted about how dependencies will be provided in Bottles in the future.

It is about providing small archives with just the essential files we need. Since we first introduced our dependency manager, we have made use of tools like cabextract and p7zip to extract files from archives and executables. Normally these are large files and therefore take some time to download depending on the connection you are using. Unimaginable using a data connection. So the perfect solution is to download only the necessary files.

We are working on a platform that automate the process, letting it download the large files, extract the dependencies and provide just those in a small archive (where the license allows it).

The process of adding and maintaining dependencies won’t change that much. At the moment each dependency is supplied with a manifest that lists the steps necessary for Bottles to install it, then a Build section will be added to the manifest, containing all the steps necessary for the platform to download and create the archive, a sort of recipe in short. See an example here.