It’s Release Day again! Over the past few weeks we’ve been working hard on bug fixes, improvements, and new features.

This is a substantial update that aims to improve stability and performance in Bottles, as well as extend its support with new dependencies, runners and features. But let’s get into the details.

The most noticable news you can see, is in the bottle creation view. We have removed the colors from Environments, since they can be understood as more or less important and therefore confusing to the user.

We have also added support for 32-bit bottles. This means that you can now create 32-bit Windows prefixes. To do this, you need to select 32-bit in the architecture dropdown. Currently it is only supported by the Custom environment.

Be sure to use 32-bit prefixes only if strictly necessary. Most Windows software and games run on 64-bit prefixes.

This feature is currently not supported with the Snap package.

Now you can set the working directory for your bottle. This is especially useful when you want to run programs in your bottles, pointing to a different directory.

Now, when the Crash Report appears, it will show you similar reports before permiting to send a new one to us. 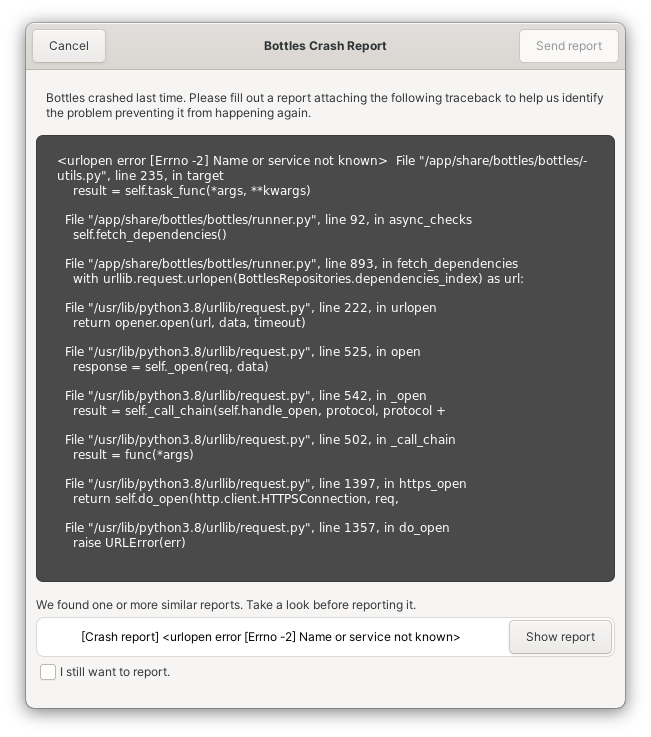 We added a new feature that allows you to clone your bottles. This is useful when you want to create with the same preferences, dependencies and software of another one.

We have added support for Wayland through XWayland. This means that you can now start Bottles in Wayland, while applications run by runners, will use XWayland.

Currently, this is not supported by the AppImage, we are working on this.

We have reduced the amount of permissions required to run Bottles through the flatpak package. You can still run an executable from any directory, because Bottles is using portals for the FileChooser.

Programs launched by the runner, may still require more permissions. You can expose some directories to Bottles, so that programs can access them. Read more about this in the documentation.

There are also a lot of new dependencies and a first concept for the installers guide-lines.

I would like to thank the new users who joined the development of Bottles. Thank you very much.