Over the past few weeks we’ve been working on a number of bugfixes and improvements as well as new features. This is an update that sees a large part of the Bottles code rewritten and prepares the basis for Bottles Trento (v4).

The original idea for Trento, was to rewrite the project from scratch, using the libwine library, part of the Bottles project.

Fortunately we managed to avoid this rewrite and started a series of rewrites of the Bottles backend, starting with this update. When the codebase is compatible, we will begin integrating libwine, aligning with the original project.

There will then be other updates that will focus on this source code update.

The most important feature of this update is in the Launch Options of the executable. It is now possible to define prefixes and suffixes in the launch options of an executable, using the %command% placeholder.

So everything that is defined before the %command% placeholder will be used as prefixes and after as suffixes, like how it works in Steam.

You may have happened to launch an executable in Bottles directly from your File manager and realize that it is not possible to create a bottle where to start the executable immediately.

Well now it is possible! Simply choose a Windows executable (.exe/.msi/.bat) from your File manager and launch it with Bottles. Then create a new bottle and when it’s ready, it will launch the executable. Easy?

Obviously it is possible to achieve the same goal using the CLI:

Thanks to the new backend structure, we have also improved the dependency manager. This in fact supports new installation methods and can now extract single files from Windows Cabinet without saturating the Bottles’ temp path.

Also, the cab extraction is now quiet, it will only show essential logs.

This will take some time for all repository dependencies to adopt the new system, in fact the old one will remain active as a fallback.

Now the new Crash Report dialog, show a notice to the user saying that there is already similar report for that crash (if any). 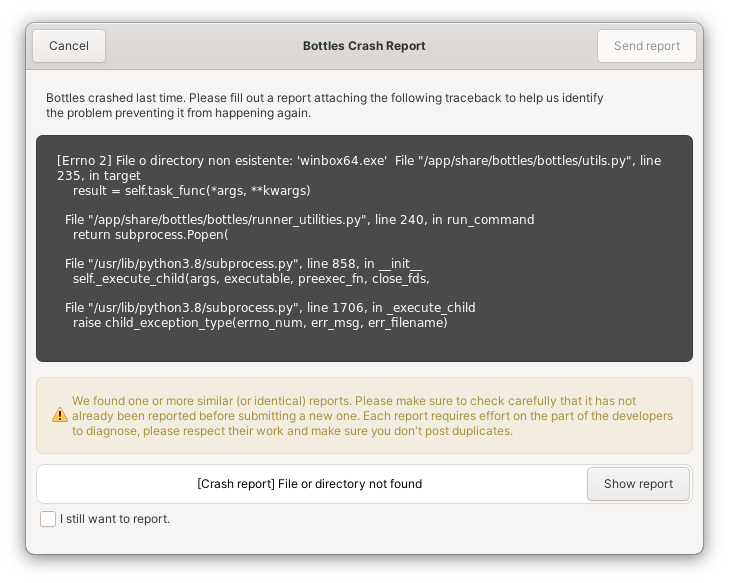 So the user should read and accept the notice to be able to send the report.

Also, in the report the homedir is replaced with /home/USER to standardize the reports.

There are a lot of bugfixes in this release. Let’s see the most important ones.

We fixed a bug in Wayland support via XWayland. A configuration error prevented the runner from starting executables under XWayland when the DISPLAY env var was not set to 0.

The custom launchers added to the program list used an incorrect working directory and this sometimes prevented them from starting.