The keys to this release are optimisation and functionality. We have worked hard to optimise the user experience and we are sure you will enjoy the new features as well.

Bottles handles WINE prefixes a little differently to other prefixes and we have already discussed this several times. Creating them is also a slightly more complex process and can take up to three minutes. We know that time is important to all of us, which is why we have worked on a template system that speeds up the process exponentially, reducing it to just a few seconds.

After creating the first bottle, a template will be created for the chosen environment. Thus, the next time it is created, this will be used as a reference, avoiding most of the operations required. Each environment has its own template and when its configuration is updated (e.g. with a Bottles update), the template is automatically deleted and recreated with the next bottle.

This will not prevent the user from updating components that are normally initialised with the creation of the bottle when using environments such as Gaming and Application; in fact, if during the creation Bottles detects that one or more components (for example DXVK and VKD3D) are not up to date with respect to the model, they will simply be reinitialised, adding a few seconds to the operation.

Being able to change the DPI of applications running in bottles is for some people an indispensable operation. Previously this had to be done using the Winecfg tool, which is WINE’s configurator. In this version, it has been implemented directly in the bottle preferences, making it easily accessible at any time. 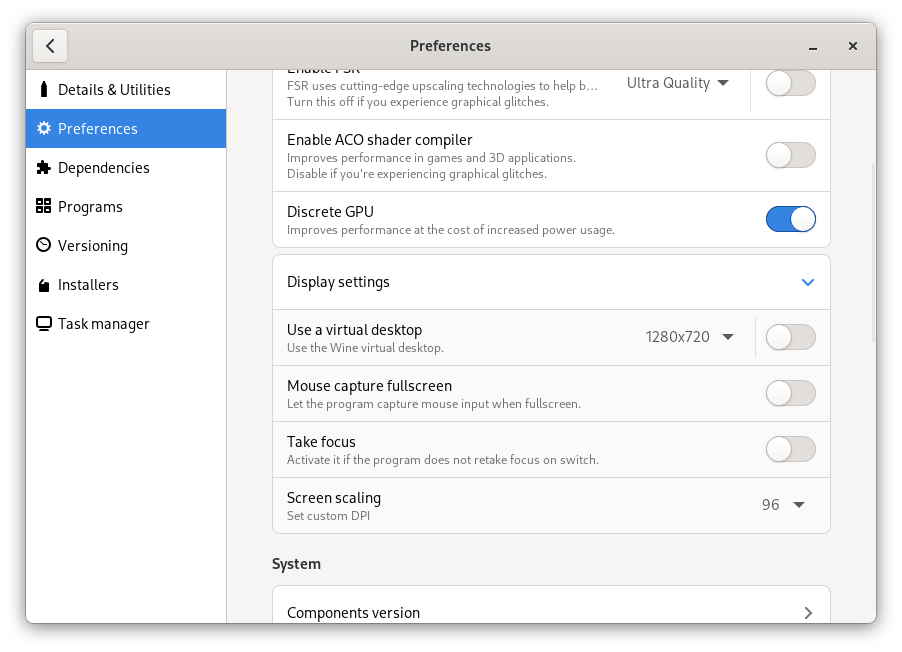 Just select the required depth from the menu and this will be applied to the next applications you run. We made a video about this feature.

On the previous screen, you should have noticed an update to the bottle preferences. In fact, many settings have been grouped together for easier navigation.

Component versions and display settings are now moved to dedicated sections (which also include a new function that allows the focus of the window to be regained when the app does not release it). 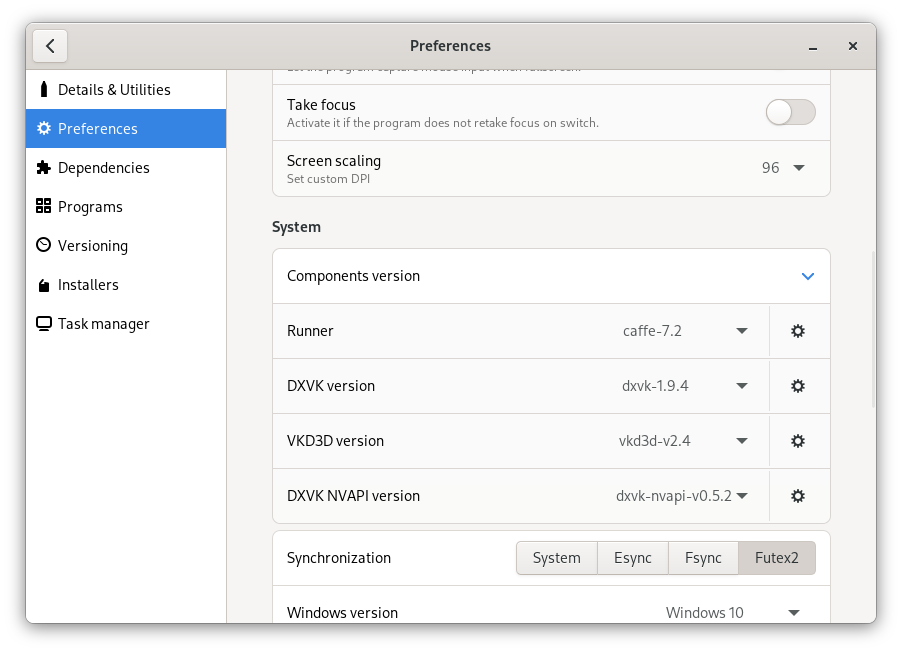 Bottles preferences have also been re-organized, now in fact the runners are divided by category, so that it is easier to reach and install those of our interest. 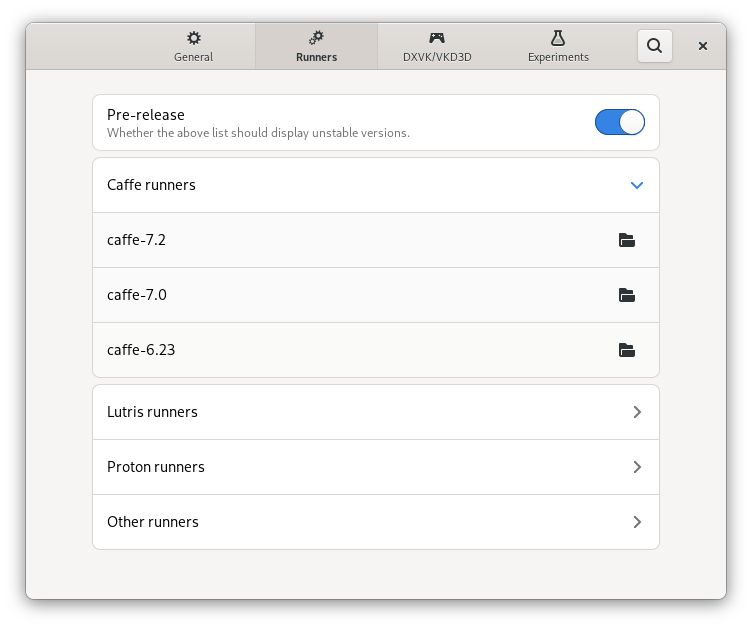 Dependency management has also been reorganized to allow for multiple installation. This option was added after many requests, but we are obliged to warn that it is not a recommended practice if you do not know what you are doing.

The management of virtual disks has also been integrated directly into the bottle preferences, avoiding the need to use Winecfg. 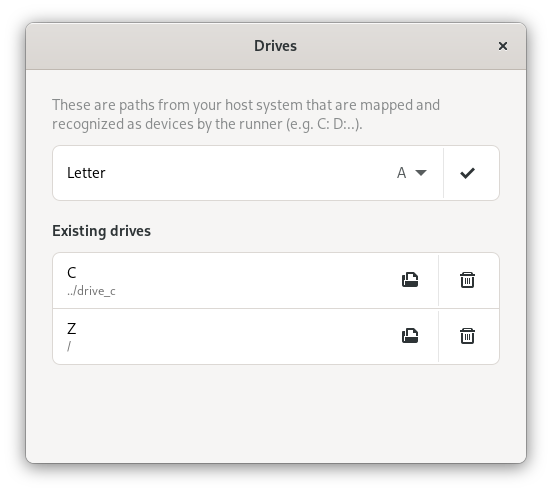 Once we reach the new option in the bottle preferences, we create a new drive by first choosing the letter to assign and then we select the path to which it must link to.

If you are using Flatpak, be sure to give Bottles permissions to that path, otherwise, the disk will not be available when Bottles is restarted.

In addition to the arrival of new installers who expand the catalogue, we have also worked to make it more powerful but also more integrated. In fact, it is now possible for maintainers to use the userdir/ placeholder to reach an executable in the user’s path in the bottle.

We fixed an annoying bug that prevented Bottles from correctly generating desktop entries. This release, however, brings this feature also (finally) to the Flatpak user.

We have made a video tutorial on how to enable this feature.

Although only the Flatpak package currently allows a complete sandbox of the bottles. From this release, all other packages will also be able to enjoy a partial sandbox. This is the automatic removal of all links from the bottle’s userdir to the host system’s homedir. To prevent this, you can choose the Custom environment and disable the option (other environments will also read this option for the entire session).

It is also important to point out that the well-known ProtonDB portal has been “recently” updated to list Bottles among the applications allowed when you want to send a report via the Contribute section. This was a happy discovery for us and we would like to thank the team behind the project for this. We therefore invite all users to send them a report when they play games with Proton via Bottles, so as to collaborate on the project.

Before closing this release post, we would like to express our support and encouragement to all the families of the victims of the war in Ukraine.

We ask everyone to consider donating to support the victims of the crisis. For this we thank Jane Lytvynenko for creating this list of organizations.

We are close to you, don’t give up. #SaveTheUkrain