Bottles is a WINE prefix manager based on environments, sets of instructions that are interpreted to make a bottle (a la Docker, we can say).

Since v2 we offer 2 pre-configured environments: Gaming and Application. In addition to those we have always allowed to create custom bottles that are therefore not linked to an environment.

From today it is possible to use your own environments, this means that you can reproduce a specific set of instructions at any time and, why not, also share it with friends and colleagues.

To use yours, simply select the Custom environment and then choose your recipe. 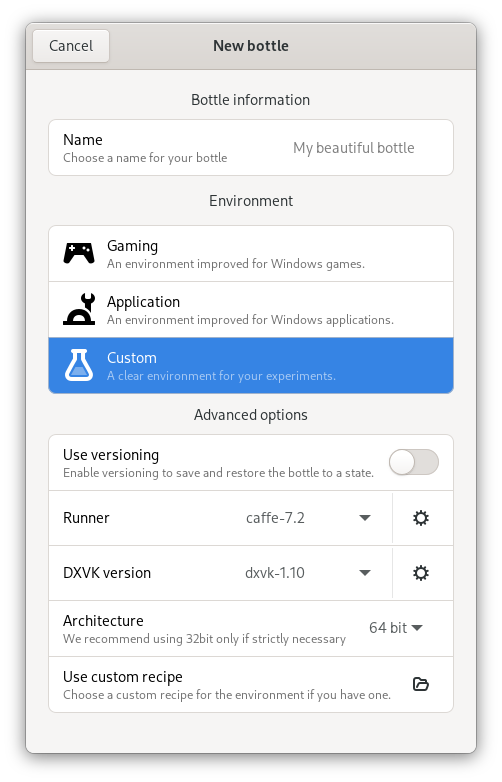 Recipes are nothing more than YAML files with a well-defined structure, like the example below:

Beautiful, is not it? Send us feedback, bug hunters!

In the last release we announced experimental support for Steam Proton prefixes. While this feature remains under development, there are lots of news about it in this release.

In fact, Bottles is now able to read the Launch options of a Steam game (installed via Proton) and interpret them in Bottles configurations. So if you enable MangoHud on Steam, you will see the dedicated toggle switched on.

Of course you can at any time change a setting in Bottles and this will be reflected in Steam (be careful because not all settings are available yet, we have enabled MangoHud, Gamescope, GameMode, FSR and others). At the moment to synchronize settings from one client to another, you need to restart the target one, we are working on it. 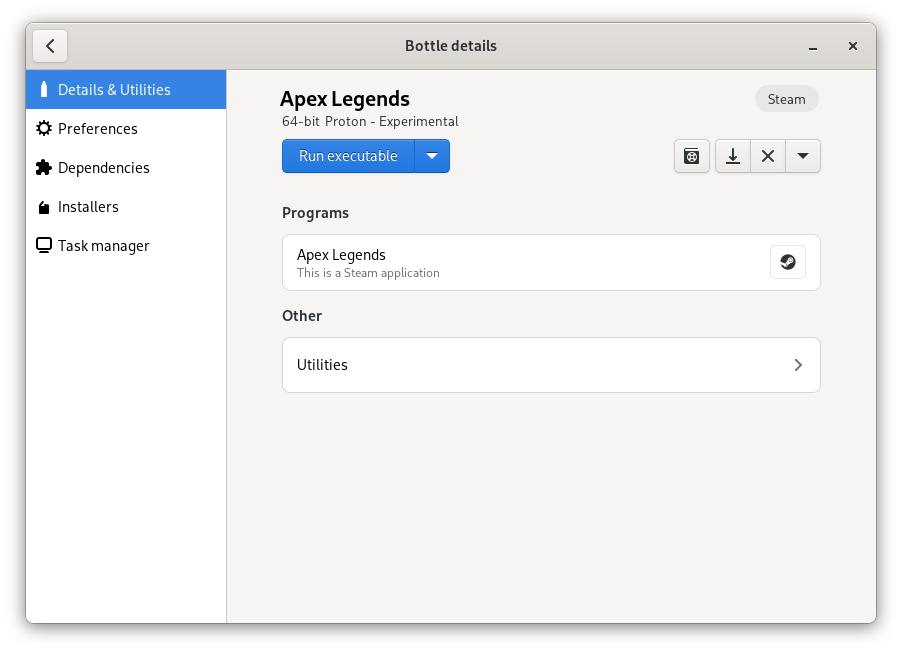 As you can see in the screenshot above, there is also another big news. In fact, Bottles is now able to recognize the game associated with the prefix and allows you to start it via Steam. We hope you find it useful.

In this release there are several new features also for the installers. There are two most important and noteworthy ones.

Now the programs installed through this feature will use a Windows path by default instead of unix. This choice was made to maintain as much internal use of the paths as possible and ensure a better functioning of WINE.

Now installers can depend on other installers, useful when one program can run on its own but others may need it. Maintainers will just need to add the new Installers section to the manifest:

and Bottles will automatically install all of them in the correct order.

We finally have a real CLI and it is very powerful!

We have heard your prayers and written a new CLI that covers tons of use cases, let’s see some of them.

How to launch it

The CLI has now a dedicated command: bottles-cli. If you have installed Bottles as a Flatpak, you can launch it by simply typing:

other packages can reach it at usual way:

And the following is its help page:

as well as components:

What about making new bottles?

We have the new command for that:

I need to edit a bottle

You can edit a bottle by using the edit command:

and you can change every parameter of your bottle, even the version of the components.

I am a hacker, I want to launch programs trough CLI 👾

Wait there is something for you too and you will love it. Now you can not only run executables:

but also directly a program of your bottle, without having to deal with paths:

Hello! For you today we have the --json flag which if set will return any output in json format, it should come in handy.

And many more features are available, refer to the --help command to list all of them.