This time we decided to take a little more time, both to take a break and to complete some long-tasks that would not have allowed us to meet the release date. This release brings many new features and improvements.

We are always looking for new ways to improve the user experience, and this time we have decided to give some love to the display options. Those options are now located in a dedicated dialog, which is much more intuitive. 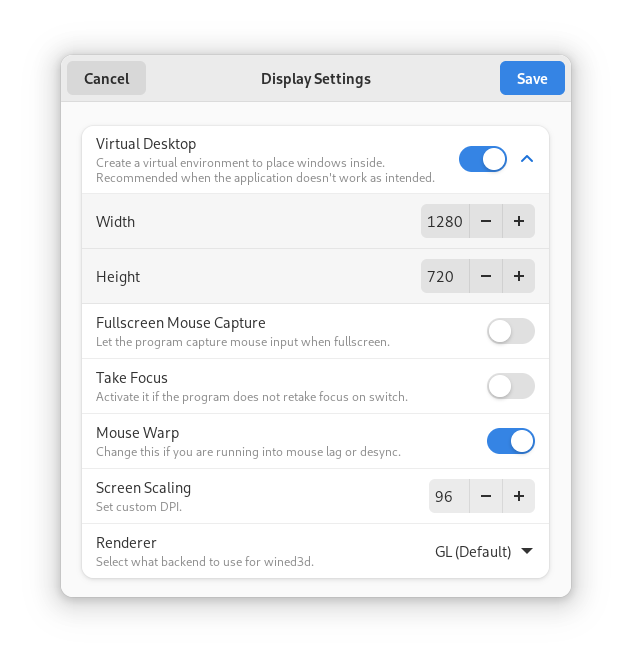 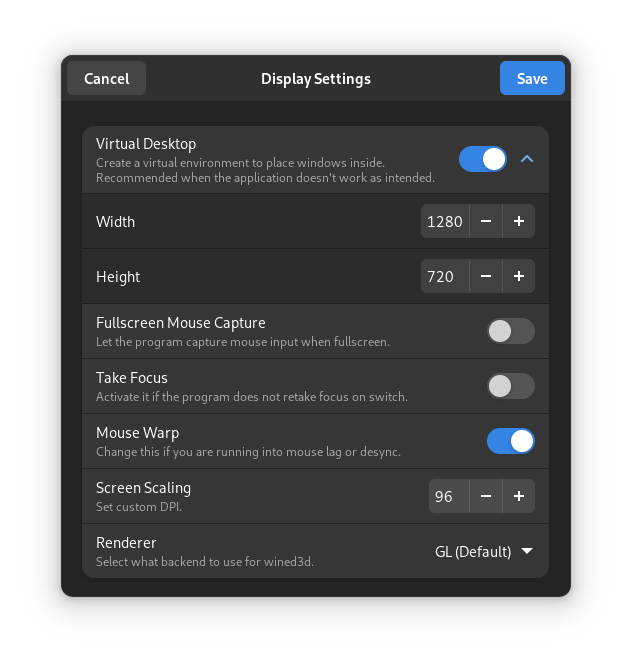 Settings are now positioned more intelligently and show more or less detail based on their state. For example, it will not be possible to change the resolution of the virtual desktop until it is activated, screen scaling on the other hand now provides an easier way to increase or decrease DPi instead of having to choose from the available options.

Sometimes the best solution is also the simplest, and this is certainly the case with Drag and Drop. With this release infact it is possible to launch an executable by simply dropping it inside the bottle screen.

This will show visual feedback indicating that you can release the executable to start it. You will no longer need to sail the seas looking for that file, simply drop it on top of it.

In Bottles we experiment with many features even though we are not completely sure that these are useful. One example is just the installation of multiple dependencies in one shot. 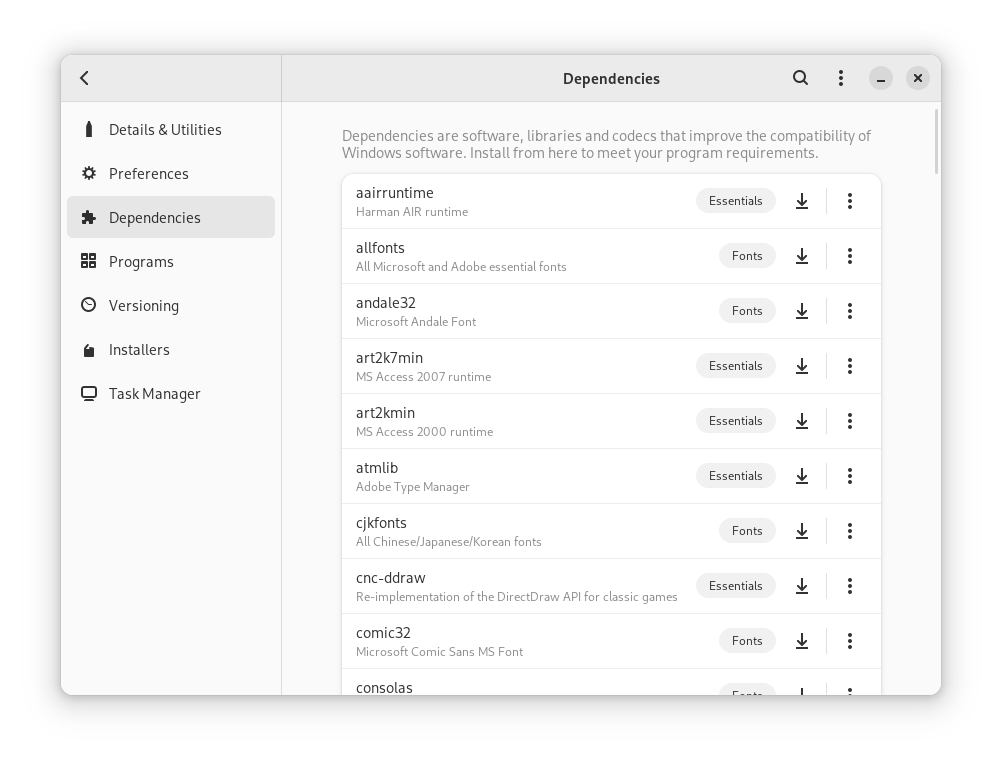 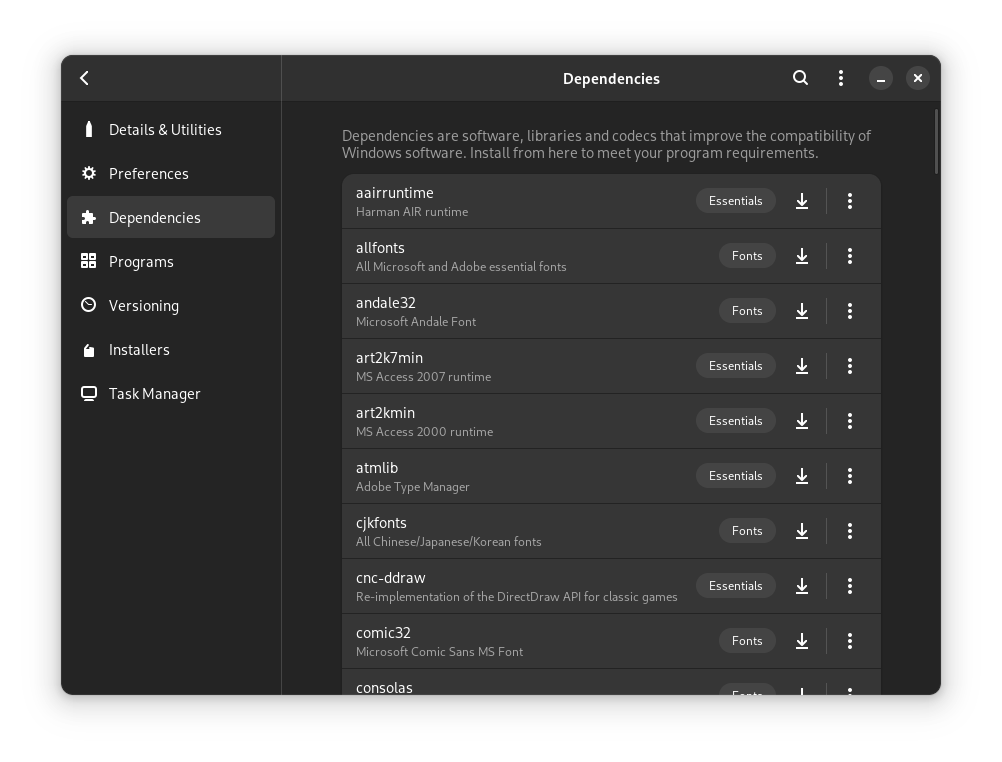 This feature was implemented some time ago at the request of users, but unfortunately this is a very problematic and risky feature since some dependencies may irreversibly damage the bottle. Therefore, we have decided to deprecate this feature.

This function also made novice users believe that it is a “right” operation because it is available, and this caused many problems including misunderstanding. Advanced users can still use custom recipes to create bottles with multiple dependencies by letting Bottles install at bottle creation.

It is always a bad experience when software is not responsive or you have to wait a few seconds for operations that should not take that time. In this release we have also worked on this aspect and it is easy to notice when we add a new program in our bottle.

Previously this procedure required rebuilding the entire program list, causing a small lag of ~2s. The new method applies the new program to the current list without having to recreate it, making it instantaneous and less noisy.

The dedicated Gamescope dialog has been improved to be more intuitive and self-introducing. 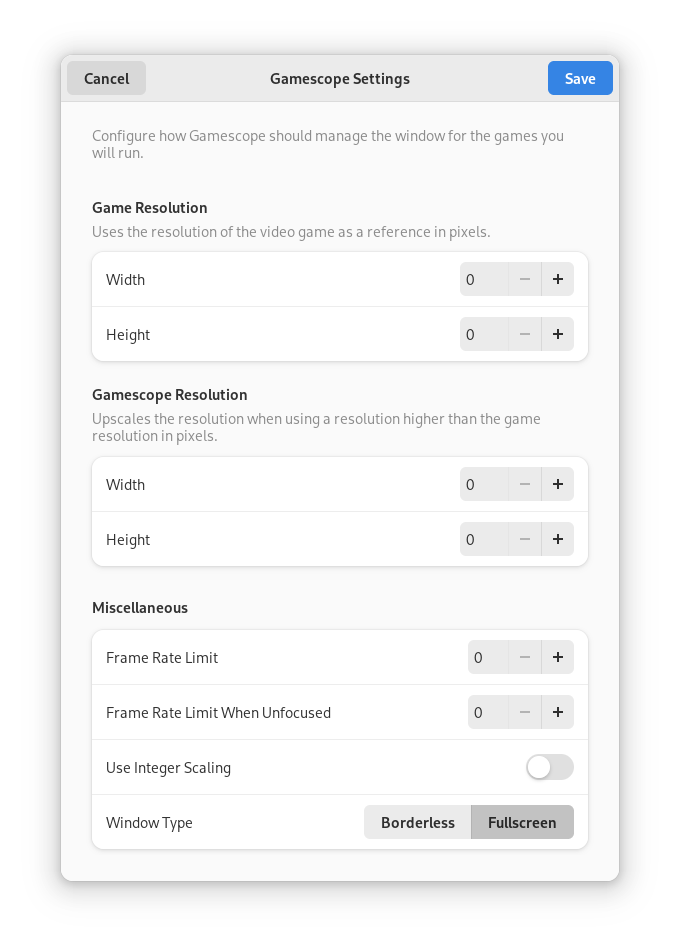 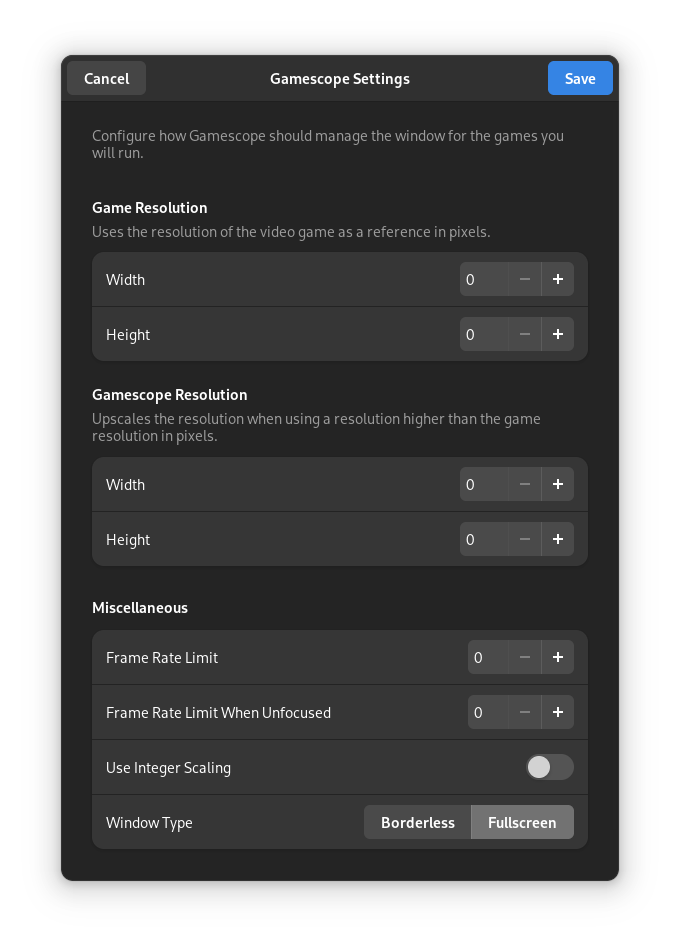 There are many UI improvements that have been applied in this release so let’s look at a few more ones.

Months ago we started our migration to GTK4 and libadwaita. While most of the work was completed quite some time ago, there were still a few tasks left to be completed. With this release we have completed almost the entire migration, leaving behind only a few small details that we will finalize in future updates. The interface is now clean, compliant and intuitive thanks to the wonderful work behind libadwaita.

Not straying too far from the GTK topic: in this release we moved from “legacy” XML templates for composing interfaces, to the new, modern Blueprint format, making the interface much easier to read for new contributors and users interested in learning. This also reduced the codebase by about 800 lines!

Speaking of UX, now Bottles will automatically hide features that are not and never will be compatible with your setup, for example NVIDIA only settings will never be shown in AMD only setup, cleaning up the interface by removing unnecessary noise. 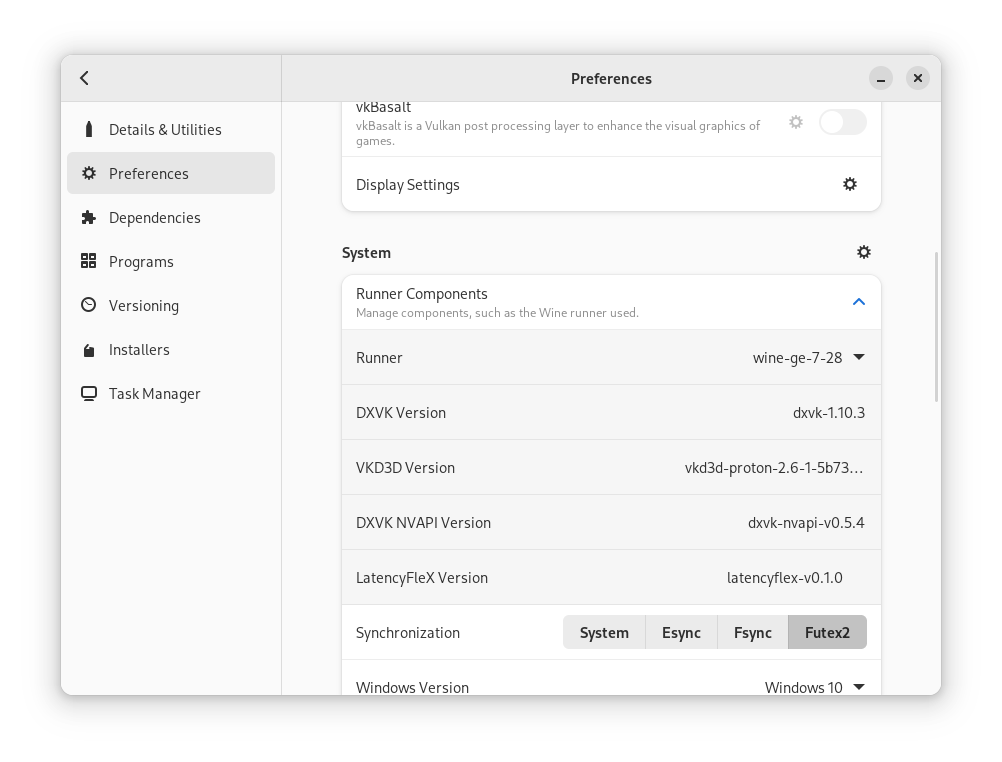 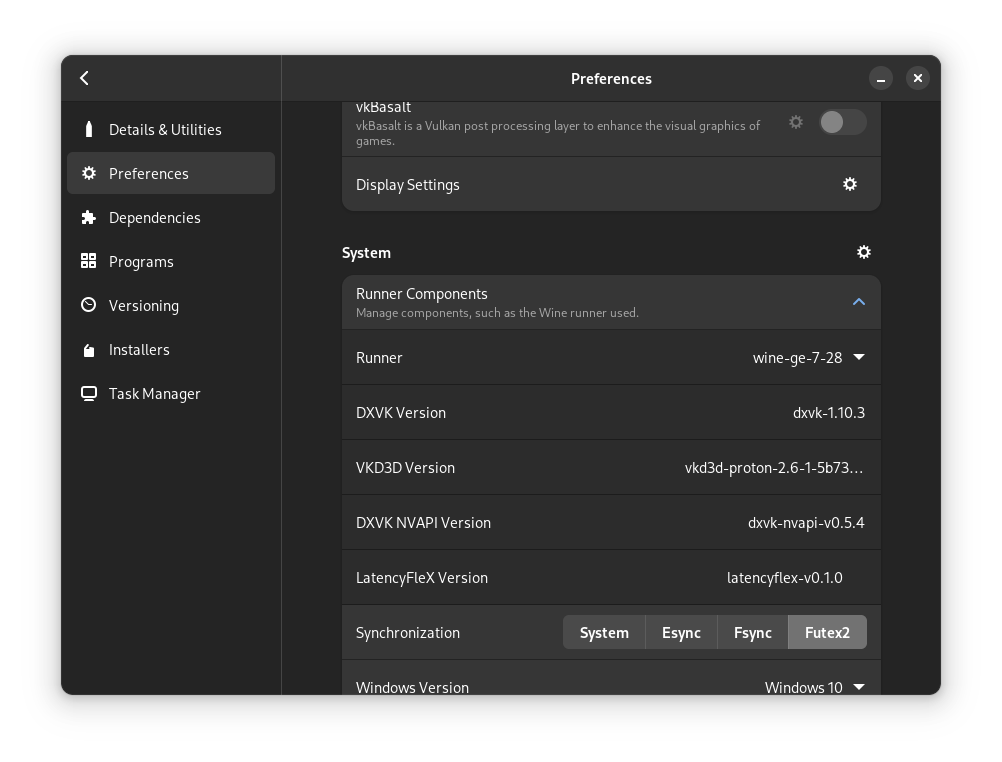 Finally, improvements have also been made for mobile. Now the interface is completely responsive and can be used on small screens or spaces, without giving up indispensable features.

In Bottles from different releases it is possible to force a different language for applications running through it. With this release we are expanding support with 3 new languages: Japanese, Taiwanese and Korean.

If you think a language is missing, please open a bug on our GitHub so we can implement it.

We have also introduced an alternative of the progress bar via terminal, which is displayed as a fallback when the system is unable to display the standard one, for example due to a language problem or characters not supported by the system.

The dependencies in Bottles are in fact software that is installed in the bottle, for this reason it too depends on a series of rules and requirements including the architecture and the dependence on a specific version of the system, for example some dependencies require you to set the Windows version of the bottle to Win98 but this version is not compatible with a 64bit bottle (win64) and for this reason it cannot be installed, now Bottles automatically hides this dependency, preventing the user from stumbling into a compatibility problem, potentially harmful to its bottle.

Some runners provide a specific or custom version of the GStreamer plugins, hich are essential for playing multimedia content. To ensure their maximum compatibility, Bottles now identifies these and prefers their plugin versions, loading them before the version provided by Bottles.

From this release the numbering of Bottles versions changes slightly, removing the codename from the version and changing the punctuation, thus moving from the previous model 2022.8.28-brescia-1 (year.month.day-codename-patch) to the new 2022.8.28.1 (year.month.day.patch).