Happy new Year! Let’s hope for the best for everyone!

Lots of stuff to talk about, so let’s start with…

As the project is getting bigger and bigger, and the developers have less time to focus on Bottles, there was a decision to ditch the monthly release cycle, to a cycle where we release updates when they are ready. That will let us have more time to develop new features, while still pushing bug fixes in due time, without having to wait a month.

We thought a lot about the new name, and we landed on Bottles 50. Why? Before the calendar versioning (CalVer), we were at Bottles 3. With the switch to CalVer, it was “Bottles 4”. Then with this new change, it’s now technically Bottles 5, but we thought this number was too low and wanted to differenciate more to avoid users thinking they got an old version. Hence, Bottles 50. We didn’t have much time to say goodbye to the old naming scheme, so… Goodbye, and farewell!

Even with this change, Bottles development will not stop, far from it. It will continue to be developped by our developers and contributors, and don’t hesitate to create a pull request or even issues if you have suggestions or if you run into problems.

With this change, we also decided to focus our next couple releases to bug fixing and polishing Bottles. There won’t be big visual changes and big new features for two or three releases, until we’re happy with the state of Bottles. Bottles will feel all the better after this, and we will be able to add new features without breaking a lot of stuff in the future!

The library got a new design! Deleting a card can also be undone. 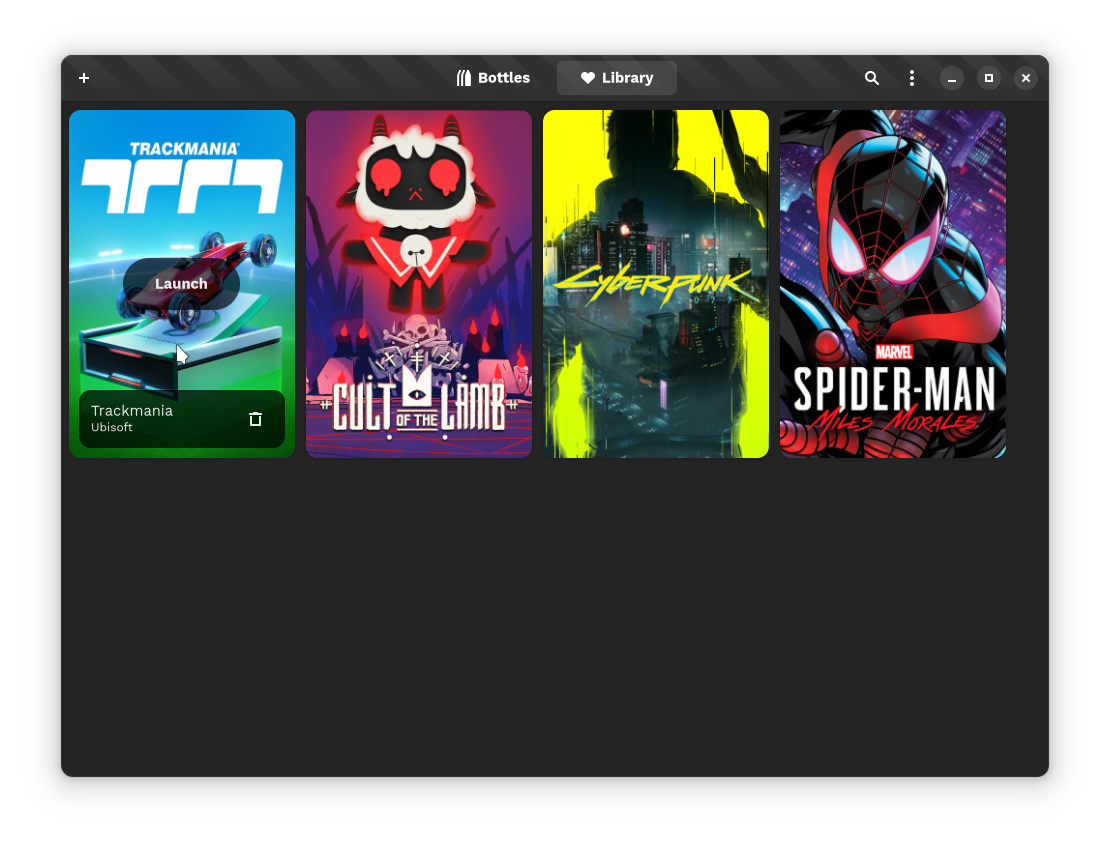 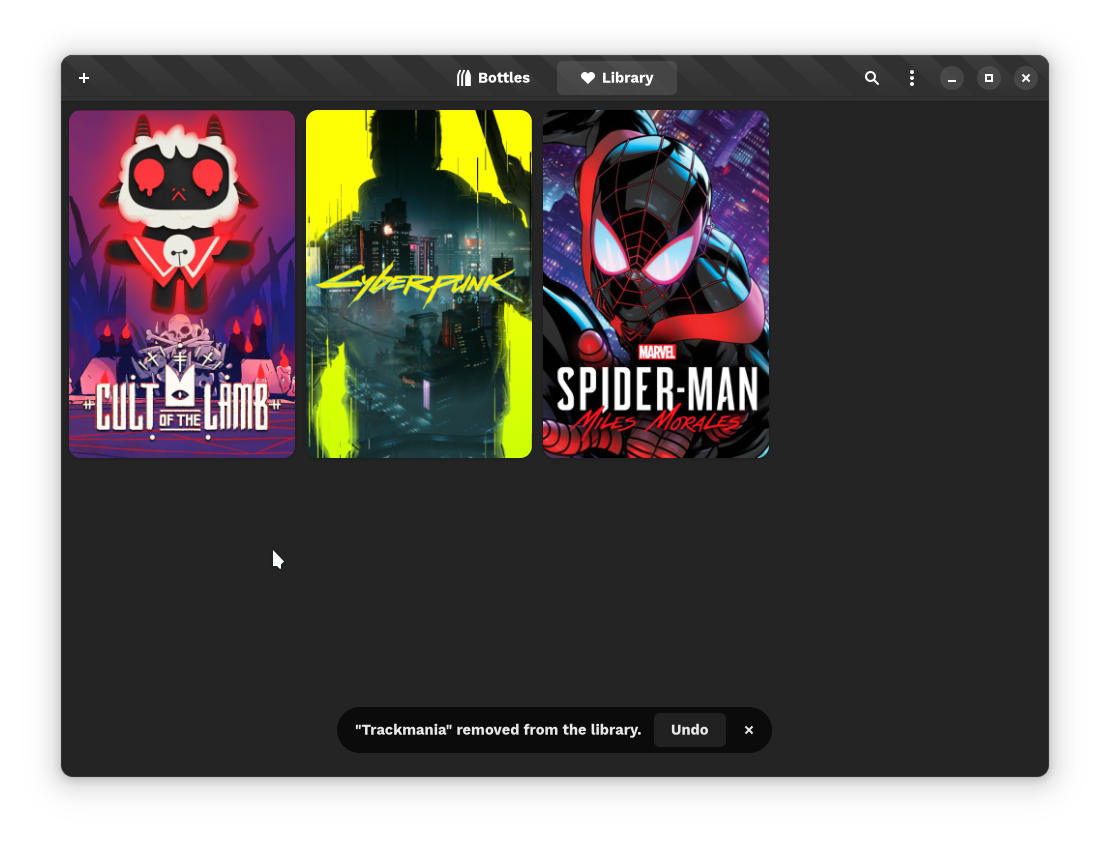 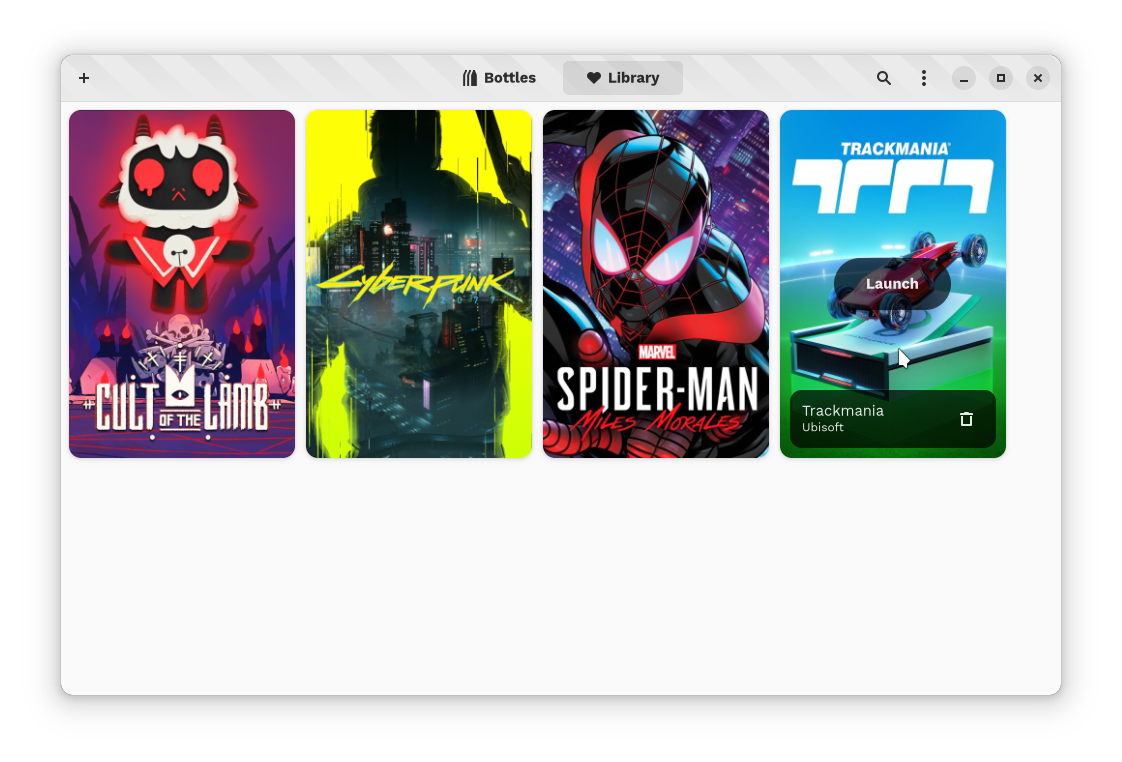 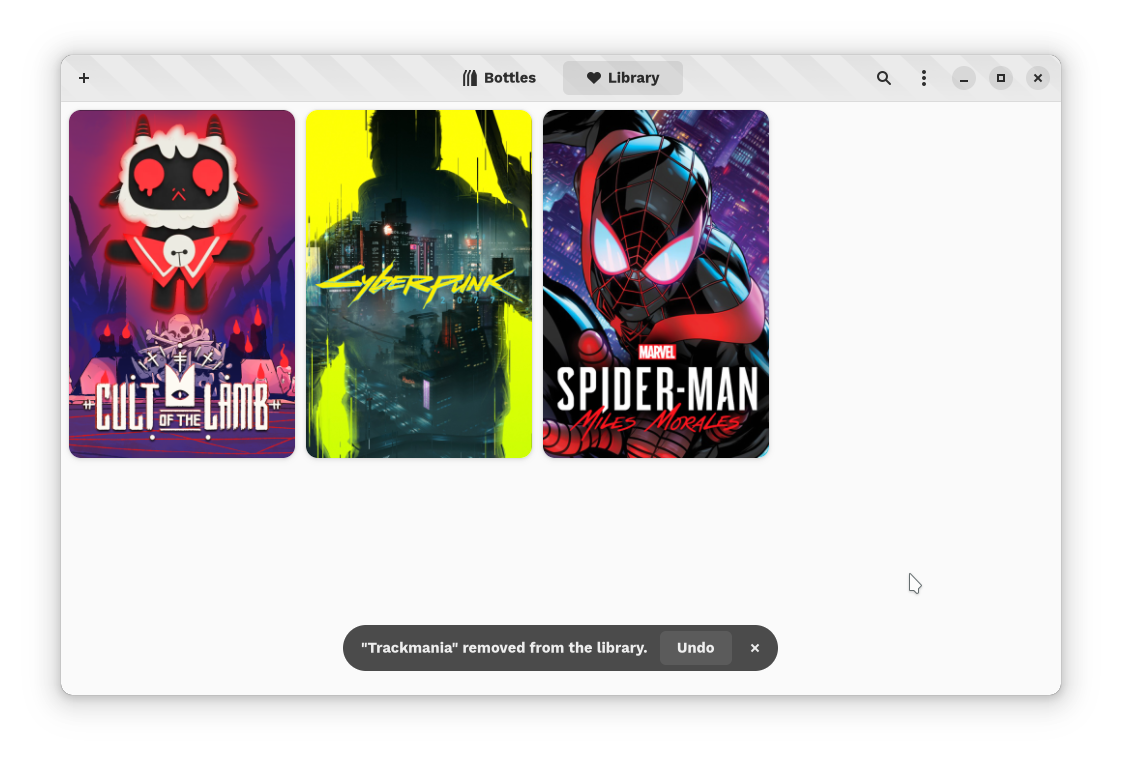 There’s now a new settings to disable window decorations in the Display Settings of each bottle. This fixes issue #2309 where the settings was only available in Wine config. 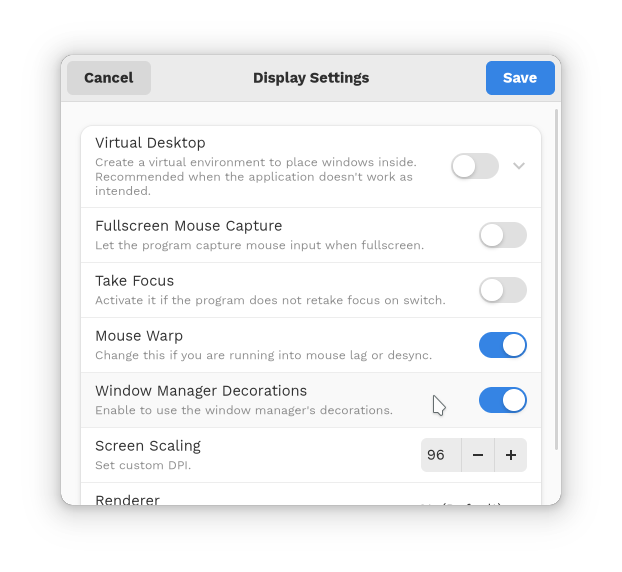 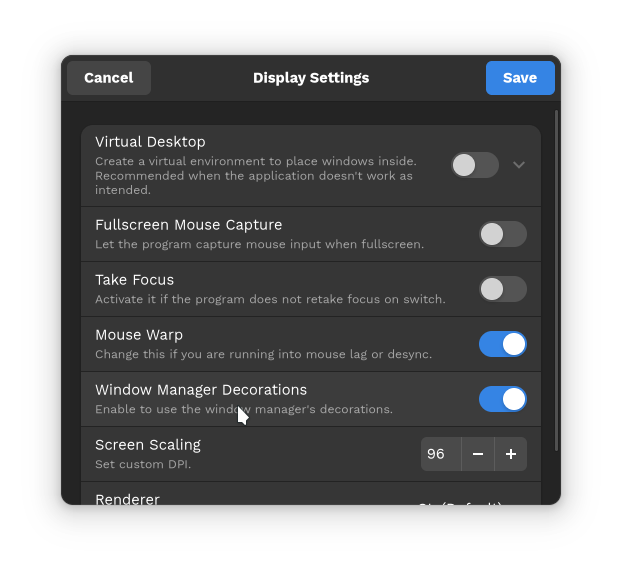 We also updated the runtime used by Bottles with the latest version of Easy Anti-Cheat libraries! This should help with some games that requires this anti-cheat software.

The options window for FidelityFX Super Resolution was updated to be clearer about what is does. 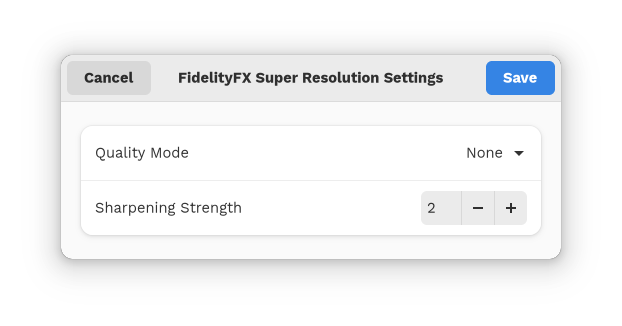 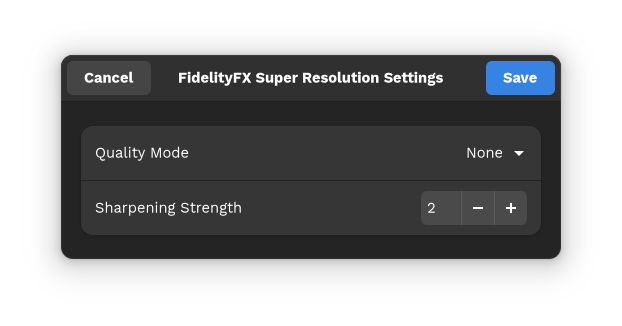 Some runners ship with GStreamer plugins, which is great! But it wasn’t properly used by Bottles. There were some changes to the backend so that now it is properly used, and works in any circumstances. You can have more details in the FAQ.

We now have a better and more robust content delivery network (CDN) that serves all the files that Bottles use, with many mirrors around the world (special thanks to GARR for hosting!).

We also now have automatic components update, so that you can have the most up-to-date version of DXVK, VKD3D, built right from their respective repository! Those versions have a git tag after their name, like dxvk-2.0-1-196fefe.

There were a lot of other changes for this release, and those were the highlights:

Few, that was a lot of things! Now, let’s talk about version 50!

As said earlier, we focused this release on bug fixing and polishing of Bottles. There isn’t a lot of new features in this release, but Bottles is a lot more stable and polished as it was before, and we will continue in this path for one or two more releases before we’re happy with the state of things.

Bottles pretty much requires a stable connection to be usable, as it downloads stuff at each startup to know about updates of components and other things. This made the startup of the software quite slow for those with a slow or unstable connection.

Now, Bottles will download in the background those updates, so that you can use Bottles faster at startup! This speeds up the startup from 3 seconds to 1.5 seconds if you have a connection of 50KB/s.

It also helps even if you have a fast connection by parallelizing multiple download at once.

When entering a bottle, the interface doesn’t freeze anymore! You will see the beautiful transition. Same thing when opening the dependency view in a Bottle. You have to experience it to know that it’s what you were missing. After you’ve tried it, there’s no going back.

Yes, there isn’t a lot of “Wow!” features for this release, but we promise you that Bottles is way more pleasant to use with fewer bugs. Here is a list of bug fixes: